Product is moving. Revenues are stable. But your competitors constantly come up with shiny new ventures. Yours is a bit stale. Your new ventures have lacked skills, imagination, or business sense. How can you stay successful?

Not to worry: you’re not alone, most organizations reach a point where they’re operating effectively, but not at all clear where to go next. Organizations that succeed in these situations recognize the counterintuitive notion that future success does not come from continuing to do the things that have made them successful so far.

There Are Immediate Practical Steps You Can Take

How Others Have Pulled This Off: Energy Company

If this seems hard to visualize, let’s walk through a real organization that was able to successfully implement a series of related technology applications that transformed their operations. Wilderness Petroleum was a sizeable multi-national joint venture with growing operations across a prolific oil & gas province.

They were in the final stages of significant capital projects which promised to dramatically augment their already profitable enterprise. However, many of these projects were designed with yesterday’s technology to be operated using yesterday’s ways of working.

At the time, new concepts in integrated oil field operations were being pioneered by several visionary producers. Wilderness had set up a study group but it was paralyzed by conflicting priorities, competing silos, and the total lack of any voice for technology, all the more ironic given the company’s high-tech reputation.

A new chief executive officer saw clearly the opportunity cost of staying on the same track. He had the four immediate steps above initiated as part of an overall “transition” program patterned on the five stage disciplined approach: 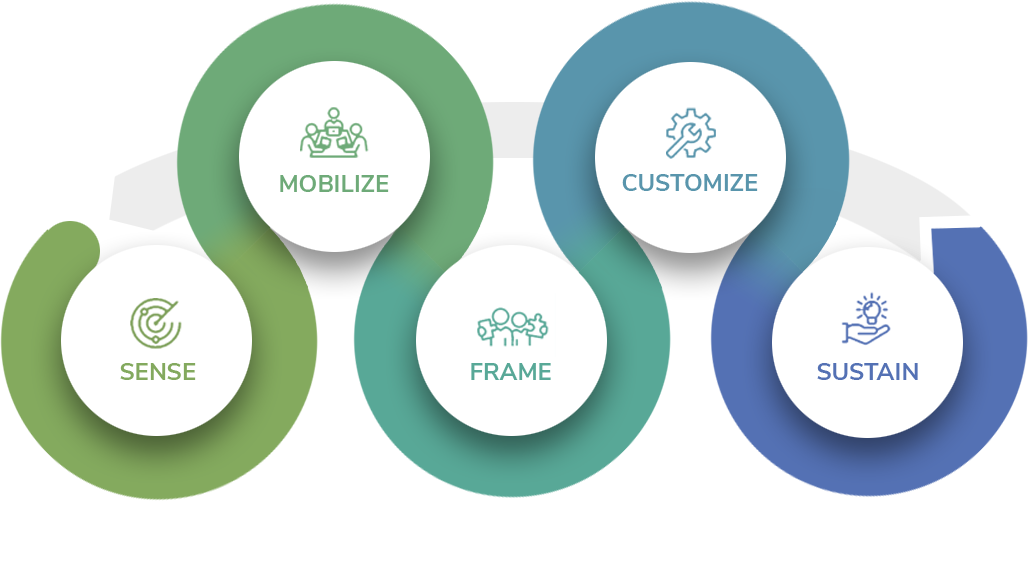 He commissioned the first immediate step as part of the Sense stage:

The next two immediate steps were taken as part of the Mobilize stage:

The fourth step was a natural piece of the Frame stage:

How Is It Turning Out?

In the Customize stage the focus shifted to close collaboration between the Operations and Technical functions on piloting integrated operations. Sensors across the platforms, pipelines, and processing plants were connected to an onshore command center. Staff from all involved disciplines learned to work seamlessly together in ways they had never imagined.

In the Sustain stage leadership delegated day-to-day operations to a cross-functional coordination council whose collective knowledge and wisdom guided this complex organization much more effectively than their previously siloed VP’s. They have consistently met or exceeded production and financial targets.

You Can Do This Too!

This is only one of many organizations missing opportunities that we have worked with. While every organization’s situation is unique, if some of the symptoms here mirror ones you are facing, give us a call and let’s further explore.

Use this Online Diagnostic to explore your organization's DNA and its relationship to the business challenges you are facing.

Syngineering takes a global, cross industry, and interdisciplinary perspective to deliver readers with four concrete yet adaptable ways to build agility into any organization. It is the result of a nine year global collaboration with the innovative leaders, practitioners and clients pioneering agility.